CEOs Embrace Expectation to go Beyond Corporate into Societal Leadership

The story of the first-ever Transformative CEO Summit was about CEOs embracing the pivot from health crisis to human connection as the world emerged from the first year of the pandemic. The thread through discussions among executives at the second annual installment held in April of this year focused on a shift for the CEOs themselves as executives embraced growing expectations from stakeholders that they take on even more of the mantle of societal leadership.

The public expectation for business leaders to play a role in areas outside of their business interests is not new. But the pressure for business leaders to step into broader societal issues appears to be intensifying. Contending with the third year of COVID, along with an economy-shaking war in Europe, continued global supply chain disruptions, and more tipping-point moments at home around issues such as reproductive health, guns, justice and democracy, CEOs find themselves more often in the spotlight and more frequently called on to be a part of the solution to some of the most challenging issues facing society.

The following areas are at the forefront for CEOs as they lean into those growing societal expectations – what the Summit theme articulates as “creating a new world ecosystem” – and what might come next for CEOs.

Even in the space closest to “home” for executive presence – within the walls of companies – the need for CEO leadership is quickly becoming more expansive. To start, many of those walls are now virtual. Workforce realities have empowered employees to demand more flexibility and sustained hybrid work. How companies treated their workers, and in particular their working parents, became a variable shaping corporate reputation, as internal and external stakeholders watched and evaluated how well corporate America supported its employee base.

Those expectations around flexibility and supporting working parents are just two manifestations of a larger trend CEOs see of employees increasingly driving culture and pushing for clearer corporate purpose. Transformative CEOs aren’t threatened by the activism of their employee base; rather, they are measuring, understanding and harnessing their employees’ purpose and passion and using it to fuel both business success and the company’s ability to have a broader impact on society.

In crisis playbooks of old, CEOs might have been guided through scenarios primarily impacting just the company, its customers, its industry, and the communities in which it operates. The last few years have seen crises become much more expansive, with CEOs being asked to lead in times of crisis through a complicated interconnected web of global health, race, economy and climate, all at once. Transformative CEOs agree that navigating this unprecedented style of crisis demands an unprecedented willingness on their part to flex and to fail. To flex, by throwing out old structures and silos and preconceived notions about what is possible. And to fail, by being open to big new ideas, failing fast and quickly course-correcting – a successful strategy through not only crisis but also innovation. 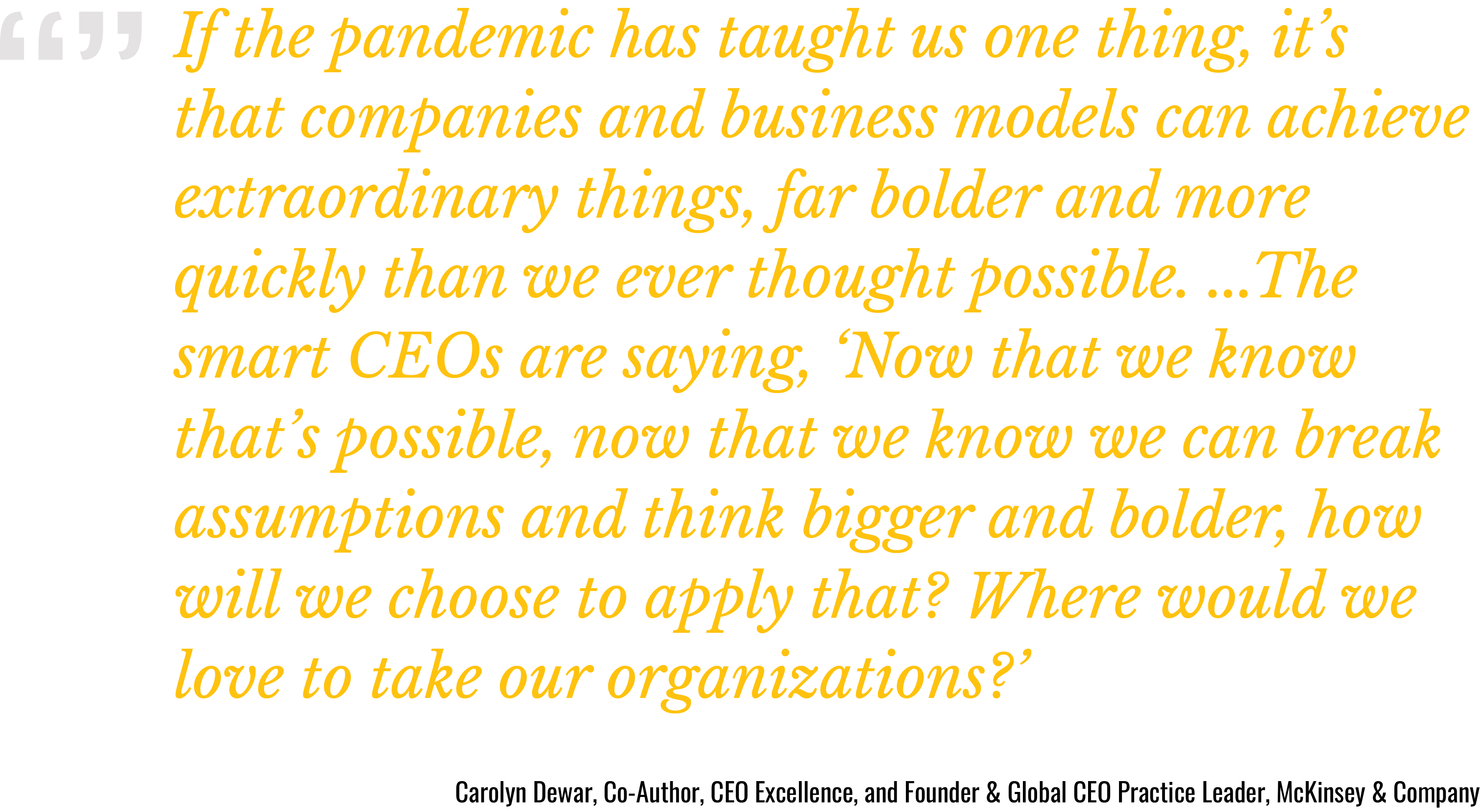 Americans increasingly expect companies to play a role in speaking out on issues impacting the public and society, while at the same time, more and more executives agree they have some responsibility to respond to major societal or geopolitical events. Purple Strategies polling of Transformative CEOs during the Summit revealed 3 in 4 feel prepared to weigh in or respond to societal issues on behalf of their companies. CEOs are also quick to point out that global impact doesn’t require action on a global scale: Authentic investment and commitment in a local community can build to influence the global community. As CEOs evaluate their purpose and responsibilities on these kinds of issues, Summit participants encouraged one another to be intentional about where, when and how they are using their voice – and then backing it up with actions. 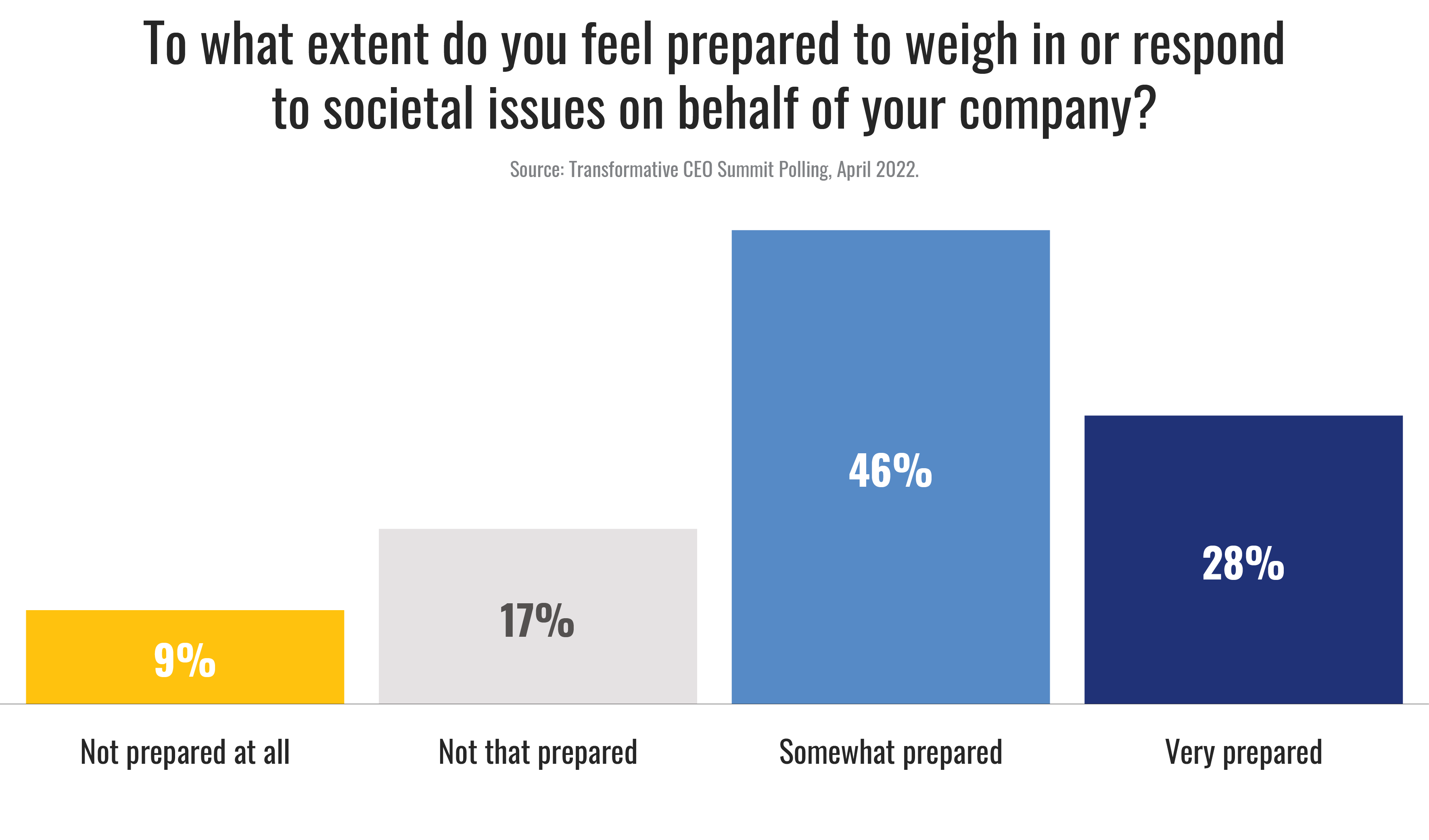 While the growing remit of the CEO looks poised to continue into even more expansive societal leadership expectations, Transformative CEOs are ready for the challenge. Summit participants were united in optimism that CEOs are prepared to meet this moment of new opportunity and engage in shaping the global ecosystem that is evolving before our eyes.