Two very different candidates made two distinct appeals to the American Public as they accepted their respective parties’ nominations for the 2020 presidential election, employing speech formats and structures of their own choosing. As nominees Trump and Biden prepare to step into the shared format of the presidential debate stage, we looked back at the style and structure of the candidates’ August acceptance speeches as one guide for what to watch and listen for in the debates.

We conducted a text analysis of each candidate’s debate transcript, utilizing a natural language processing tool that produces graphical representations of what each candidate said. These graphs visualize the statements made by each candidate, and group similar phrases and sentences together, to reveal topics of discussion and the similarities and differences in structure and theme.

We also asked two of our own political experts, Jordan Davis and Jennifer Kohl, for their take on what these data visualizations tell us about each candidate’s approach to their acceptance speech. Davis was a policy director and communications advisor at the National Republican Congressional Committee (NRCC) during the 2014 and 2016 election cycles and a legislative research director during the 2010 cycle. Kohl was the communications director for President Obama’s successful re-election campaign in Virginia in 2012, one of the top two battleground states in the country.

The Convention Speech Distinctions in 3 Visualizations

DISTINCTION IN WORDS AND MINUTES

Trump speech among longest in history; Biden speech is shortest in decades. 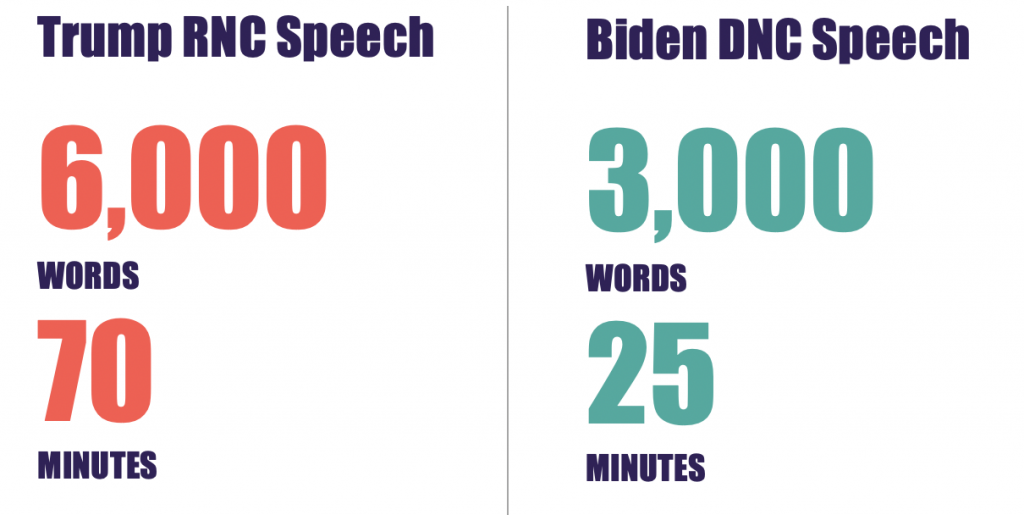 Even before either candidate uttered a word of his speech, the difference in format presented an immediate point of divergence between the two candidates. Breaking with tradition but in keeping with his preference for a live audience, President Trump used the The White House Lawn as the backdrop for delivering his acceptance speech to 1,500 people. Biden meanwhile centered a safety message in his choice of venue, taking the stage at a near-empty convention center in Delaware to deliver his acceptance speech to a virtual audience at home.

Trump’s speech took roughly three times as long as Biden’s to deliver, clocking in at just over 1 hour, compared to Biden’s much tighter 25-minute speech. In fact, Trump’s 2020 nomination acceptance was the second-longest in recent history, surpassed only by the President’s 2016 acceptance speech. Some of that length can be attributed to the live audience, but not all. The president’s speech was also twice as long as Biden’s by word count, with Trump speaking over 6,000 words compared to Biden’s roughly 3,000-word speech.

What we’ll watch for in the upcoming debates: The debate format is intended to equalize air time, but that’s not always reflected in reality. We’ll be watching for how the candidates regulate the time of their own comments, and possibly those of their opponent’s, and for how much time control is exerted by the moderators in the debates.

Trump stuck to a similar refrain throughout his speech; Biden allocated time to a variety of different topics.

The graphical representations of what each candidate said feature nodes (circles) and edges (lines connecting circles) to visualize the structure and themes of speech in the graph. The closer the nodes are to each other, the more similar the conversation. Likewise, the closer a cluster (group of circles) is to other clusters, the more similar their topics are to each other.

What we see in President Trump’s graph is that all of the clusters are connected, and the nodes are relatively close to each other. This indicates that the phrases and topics Trump used are similar in nature, and that over the course of his hour-long speech, he returned to the same topics again and again. Trump primarily discussed his record or approach, using phrases like “I kept my promise,” and frequently raising issues with Joe Biden and his approach, repeating phrases like “If Joe Biden is elected…” or “The radical Left wants to… .” Compared to Biden, he spent less time laying out particular policies, and did not detail his plans for his next term.

Conversely, what we see in Biden’s graph is that the clusters are connected to only one or two other clusters and are farther apart from each other. This reveals that Biden used his shorter time to cover more ground and to discuss topics that were more diverse. In particular, Biden incorporated several different angles to introduce or provide context for the topics he covered, including discussing his relationships with his wife, Dr. Jill Biden; his late son, Beau; and his vice-presidential running mate, Kamala Harris; and outlining different and specific policy issues, including climate change, the COVID-19 pandemic, and Medicaid. Biden’s use of phrases like “hope and light,” “I see a different America,” and “we’re better than that,” added elements to his speech that were less pointed and more abstract.

What we’ll watch for in the upcoming debates: Debate topics are chosen in advance and addressed by both candidates, putting candidates in a position of having to address issues they choose to avoid in other formats. We’ll be watching the data to see the extent to which the candidates address the topics directly or revert to their chosen terrain.

“There’s a case to be made that Biden is very deliberately using a positive and diverse set of messages to appeal to a range of audiences beyond his base on issues they care about—including people who may have voted for Trump in 2016 and are now looking for a pass to change their vote this time. But anyone who has followed Biden’s life and career will know that these are more than just talking points for him. He genuinely believes in the things he’s saying; the challenge will be successfully conveying that beyond his core base to a skeptical audience.” – Jen Kohl

DISTINCTION IN DIRECTNESS OF ATTACK

Watching and listening to each candidate’s acceptance speech, it was immediately clear that the two candidates took very different approaches to calling out the failures and dangers of electing their opponent. But the quantification of the difference between their two approaches was stark: Trump’s speech consisted of 41 mentions of “Joe Biden” or “Biden” by name. Trump repeatedly invoked Biden’s name to make his case that electing Biden and giving power to the Democratic party would lead to such outcomes as “anarchy,” “damage,” “calamities,” and “destruction.”

In contrast, Biden made zero references to “Donald Trump” by name in his speech, instead calling out the “the current president” or “the president.” While never mentioning Trump by name, Biden spoke of the role of the president to the country, comparing Trump’s administration with his vision for the role, even as he challenged the president’s record.

What we’ll watch for in the upcoming debates: Separate convention venues now give way to a single stage. We’ll be watching the data to see how each candidate attacks or draws distinctions when they are finally only a few socially distanced feet apart.

“From the convention speeches we can likely infer that Trump will go on the attack against the Biden/Harris ticket and largely pivot away from addressing policy specifics. Biden will likely take a hybrid approach, continuing to draw contrast in order to frame the election as a referendum. But he’ll also work to articulate a vision on policy matters in an attempt to appeal to diverse pockets of the electorate and their interests.” – Jordan Davis