Purple is introducing our new CEO Research Project, developed with our partners at The CEO Forum Group, a media and content company that serves, connects and convenes the CEO community.

Each week, the project collects insights on news of the day from top CEOs while surfacing data, context and insight to guide executive action.

Examples of data stories developed through the project can be found below. Explore all the CEO Research Project insights on the project website or weekly on the Purple LinkedIn and Twitter channels. 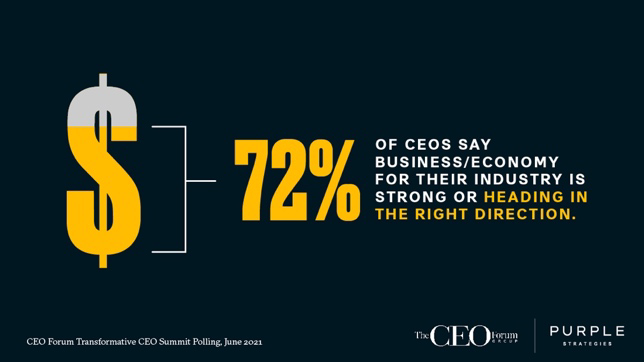 When polled during the June 2021 Transformative CEO Summit, CEOs and other executives gathered virtually at the event expressed optimism that we are emerging from the pandemic into significant economic opportunity – betting on pent-up consumer demand and COVID-necessitated efficiencies like increases in automation and greater adoption of technology to prevail over looming warning signs including supply chain issues, rising inflation and resurgent case counts.

Empathy and Human Connection Needs on the Rise 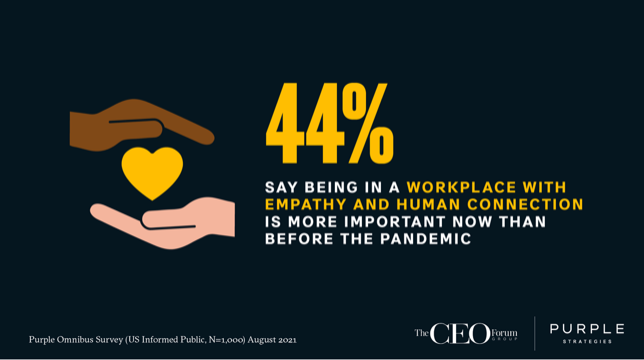 When leading CEOs gathered early this year for the first-ever Transformative CEO Summit to discuss the unprecedented events of the past year and ways they will shape the path forward for corporations, the importance and resurgence of human connection emerged as the unifying lens. New public polling indicates the CEOs were right. For 44% of the Informed Public, being in a workplace with more empathy and human connection is more important to them now than it was before the pandemic. The increase in importance is even more true for younger employees (52% for those 18-34 years old), employees who are parents (49%), employees working in a fully remote or hybrid environment (49% each), or whose volume of work (48%) or level of work-related stress (53%) has gone up during the pandemic. These groups all account for a huge share of any workforce. An additional 40% of respondents say it’s no more important now than before, but empathy and human connection in the workplace is still important to them. 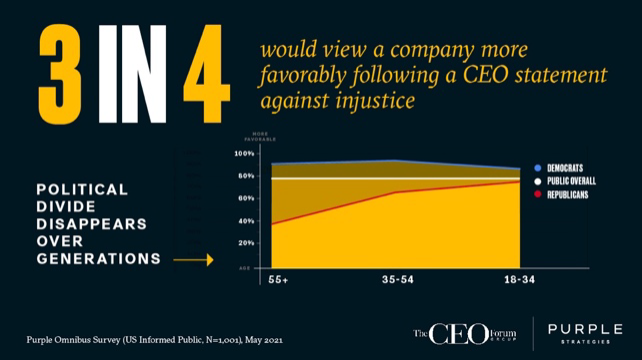 CEOs today are expected to lead not only on issues directly related to their business but also on key issues of society at large. Among adults who regularly follow the news, 3 in 4 (77%) say they’d view a company favorably (31%, much more favorably) following a CEO making a public statement against injustice. And while such expectations have historically been considered a demand coming from just one end of the political spectrum, the reality is that support today cuts across political party lines – with any remaining political divide disappearing with each new generation.

“It’s no longer a choice to separate executive reputation from corporate reputation.” – Explore the insight from Futurecasting by Purple Strategies.

CEOs Embrace Expectation to go Beyond Corporate into Societa...