Be Ready to Burst the NBA Bubble

If there’s one thing we do well in America, it’s argue. Especially about politics. Taxes, healthcare, the environment – on pretty much any topic, it’s a fair bet that about half of Americans will happily disagree with the other half. But sports has always been different.

Despite increasingly divergent opinions on the intersection of political activism and our national pastimes, the love of competition on the professional playing field, court, or rink has been something we come back to in times of challenge. Sports represent a fun and safe place to connect, and yes argue, with family and friends. Or at least it used to be.

As COVID-19 infections continue to surge across the country, the pandemic is creating new political and social flash points around what it means to play ball.

For the NBA, a league that has invested heavily in bringing players to Florida for the July 30 season restart, the challenge of playing indoors in the midst of the crisis is particularly pointed. In March, the NBA’s move to postpone the 2020 season after a single player tested positive was a bellwether of things to come. Their early, decisive action was brave and sent a message about the value of player and fan safety.

Half of fans say the league should cancel the final set of games if players start to test positive, full stop.

What’s underlying this concern seems to be two widely held beliefs: first, 73% of fans say that looking back, the NBA’s decision (and those of other leagues) to pause play was the right move; and second, 65% say players, despite being paid between merely huge and hugely massive sums of money, shouldn’t have to play if they have concerns about the virus. Only 29% of sports fans say players should have to lace up.

The reality is that the NBA is riding high on its positive reputation right now, despite the much maligned “bubble meals.” Fans are bullish on the league’s future (45% say its best days are still ahead!) and its reputation for deftly navigating social issues is the envy of every other league, including the NCAA. In April, The Boston Globe noted “The NBA is the only [league] trusted to do the right thing, whatever that happens to be, largely because Adam Silver is the most competent and compassionate commissioner in sports. It’s not close, really. He’ll be worthy of our trust when sports return and normalcy begins to be restored.”

And yet here we are in mid-July, staring down many of the same challenges we faced in April. The virus is surging and hospitals in some parts of the country are at a breaking point. In many ways, we’ve willed an opening that we weren’t ready for, and the NBA is doing everything it can to toe the line with its own. Every industry and business is facing this challenge of the public wanting something we might not be ready for, but probably nowhere is it more easily visible than with sports. Non-sports fans are nearly 60% more likely to think restarting the NBA right now is a mistake. 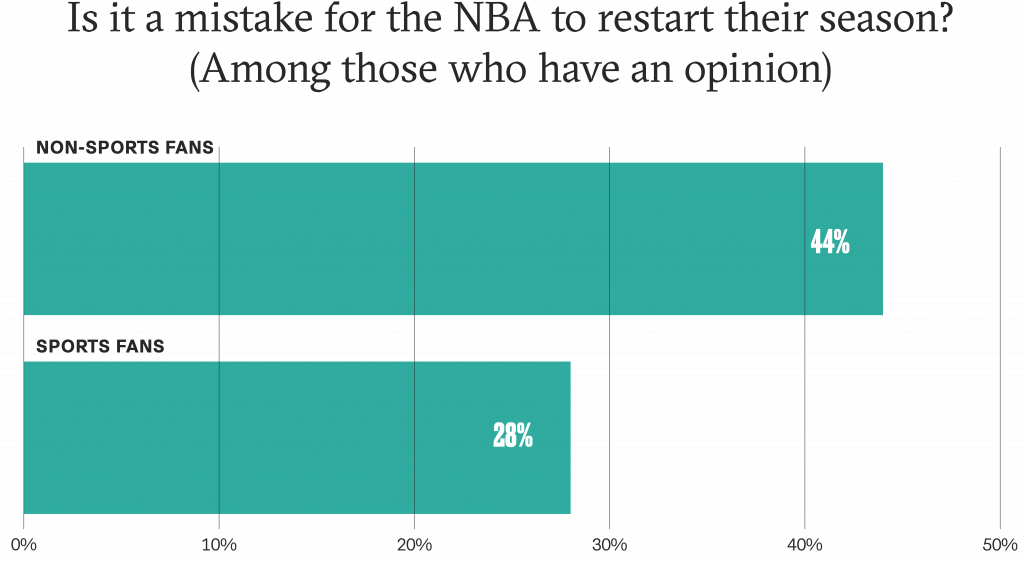 Adam Silver should tread carefully to protect his and the league’s reputation equity in the coming weeks. In March, he pulled the ripcord and quite literally saved lives while strengthening the NBA’s reputation. Being brave enough to ignore the sunk costs of the restart if players start testing positive will cement beliefs about the league’s values, deepen trust in its leaders, and accelerate the NBA’s aspirations to become the leading American sport of the future.

Purple is actively partnering with companies and industries to navigate the ever-changing COVID-19 pandemic and prepare for the future that will come after, bringing deep experience helping the world’s best-known companies navigate the world’s toughest challenges. Please reach out to author Nate Byer or any member of our Purple team to let us know how we can support you.

New CEO Research Project Surfaces Data From and For CEOs to ...